After the most amazing time at Lake Powell, we packed our boards and drove to Las Vegas, Nevada, where the World Wakesurfing Championship took place again in Lake Las Vegas in Henderson.

The way back to Vegas was seriously so beautiful. There were so many rock formations on both sides and lot of diversity in the landscape. The drive was about five hours long, and we drove back with Caroline Villenueve and her boyfriend, Ben. At the entrance of Las Vegas there was a lot of traffic, and we got kind of lost, but we eventually found our way back to Lake Las Vegas. The place looked like an Italian Village—it was a super nice little town, with two big resorts and a nice bridge with the water right beside. It’s such a great location that definitely exceeds your expectations. We arrived on Wednesday and were able to finally rest and work out a bit to try and get ready for the competition. After working out, we hit the spa at the resort. We were tired from the long day but excited at the same time for the next days to come. Later that day I went to the airport to pick up my friend and business partner, Phil Lemay, and his girlfriend Katia Brascoup who would also compete in Worlds. Last year Katia won in her division Women’s Master, so she was super excited to be in Vegas again.

Philip is one of my best friends, who is also my partner at the Hi-5 Wakeschool. It’s almost his fault that I started wakeboarding and wakesurfing. He pushed us to progress and start landing our first tricks almost 10 years ago.

We all had a nice dinner and rested, and the next morning the competition already started with the Master and Amateur divisions. Katia rode all right, and we stayed there to check the rest of the competitors. The ambiance was good, and people were happy to spend the last contest of the year all together. After the first day we hit the pool to cool down from the heat. Its always nice see people from all over the place attend this contest. There were people who came from Russia, Switzerland, Canada, USA, and more.

My friend Alena, who is from Russia, was there competing in the Women’s Pro Surf Division. She was wearing her new wetsuit brand, Glide Soul, who sponsored the event for the first time.

Some guys from Mendonesia were there too. They are a super cool crew and are all very laid back. Being there with some products to sell at the contest, they always want to have fun and work together like a family.

Also Matt and Paul, some guys we met in Lake Powell, came to the event. They are super nice guys that are into video and filming. They have a drone camera and film a lot of the events with it—they even created their own live feed on the internet with a lot of footage, including interviews with people.

The weather was super hot and dry, although we didn’t have luck with the wind, which was super windy and choppy.

Pretty much all of the people from the wakesurf industry were there. Now there are a lot of new brands that make wakesurf boards, clothing, etc. It’s nice to see all those people together sharing their passion and love for such a new sport.

Everyone was so excited and glad to be there. In the history of the wakesurf competitions, there have been a lot of comments. Some are good and some of them are not so good, but at the end of the day the most important thing has been the passion we share as riders, and we all have a good relationship with each other.

The first night we had a dinner in the Hilton—it was a night full of good food and good friends.

The next morning I was ready for the competition. It felt really good to have a lot of support from everyone—several people came to see me and wish me good luck and my friends and family were watching the live feed on internet.

Keenan Fleegel killed it in the finals at surf style and skim style. There were amazing runs that were full of tricks. There was a lot of anticipation for the results, especially because there was a cash prize of $100,000 again.

That night we had the awards, so everybody dressed up in their nicest clothes and dresses. It was cool to see everyone dressed up so nicely, because normally we are always in board shorts and sandals. They had a red carped and with a live feed so everyone at home could watch what was going on.

They gave $5,000 to the 3rd place in the Pro Categories, $8,000 to the 2nd place and $12,000 to the 1st. I didn’t ride too well so I didn’t qualify for the finals. I wasn’t too happy about it, but it’s part of the competition life. At the ceremony awards that we had at the Hilton I won the Trick of the Year with my Hi-5 Flip. I was super exited and everyone stood up for me. It’s awesome so see all the support from everyone and I really appreciated it!

That night we all went to downtown Vegas, it’s not the kind of city I’m used to but we all had fun, and the next morning my season was officially over.

None of this could be possible with out the help, time, and passion of so many people. Also, congrats to all the riders for the amazing contest, and thanks to all the people behind the wake surfing industry for sharing the passion and love for our sport. 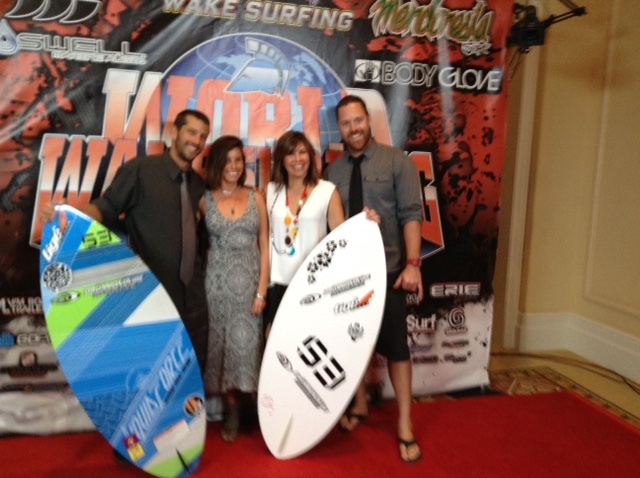