Justin Caskey, two-time cancer survivor, is an inspirational and progressive rider in wakeboarding. He grew up doing all sorts of water sports with his family when he was eleven years old. Around that time his dad bought a Tige and he started progressing very fast. Unfortunately, he broke his leg when he was thirteen years old, which led to the diagnosis of malignant bone cancer. After a four-year battle, the doctors had to amputate his left hip. However, this didn’t stop his passion for wakeboarding.

He quickly adapted and was back on his board and behind the boat. Justin’s father built a one-of-a-kind wakeboard with a stability handle to lean on. It’s been five years since his fateful day of getting back on the water and he’s still going strong. He’s developed a full prosthetic leg and hip in order to keep progressing. He’s back on the wakeboard, enjoying himself, and that’s what it’s all about.

TB: How did you get into wakeboarding?
JC: I got into wakeboarding because my neighbor at Lake Anna, Carl, was the “resident expert” on the lake and he saw potential in me. He taught me everything in the beginning and then I added my own perspective to it later.

TB: What is your favorite part about wakeboarding?
JC: One of my favorite things about wakeboarding is that it’s something that comes natural to me. Everybody has “their thing” that they feel like they do well no matter what anyone else thinks haha. For me it’s wakeboarding and it never fails to make me feel invincible.

TB: What's your favorite memory about riding behind a Tige?
JC: My favorite memory about riding behind a Tige has to be the first time I ever road behind my family’s Tige right after we got it. I had grown up wakeboarding behind a V-drive, inboard/outboard Larson that had no tower, no bags, no wedge or any of the things we take for granted today. I landed my first tantrum behind that boat and it was a struggle. With the new Tige I had more wake to work with and it made everything so easy. It was like I had been high-altitude training my entire career up until that point.

TB: Where do you find the motivation/inspiration to overcome and adapt to everything life has thrown your way?
JC: I find motivation just like anyone else I guess, mostly through life experiences. While I was in the hospital I saw some other people whose stories didn’t end as happily as mine. That was the moment where I realized I, like most people, don’t really have a lot to complain about. I also find a lot of inspiration from my family. After watching my family battle my cancer equally as hard as I did I was inspired to push myself harder.

TB: How did you initially end up back in the water, and how long did it take you to start riding again?
JC: I ended up back in the water one morning when I was watching my friend Chris Harris (who filmed and edited the documentary) ride on some of the glassiest water I have ever seen. It was the tipping point. I saw how much fun he was having and decided I would at least try to get on the wakeboard and just try to get on top of the water. It had been about 5 years since I had last wakeboarded and it all came back to me pretty naturally.

TB: In terms of your riding, do you have any specific goals for the next couple of years?
JC: When it comes to my riding I have several goals of things I want to do. First I would like to perfect my landing of a customized backflip I’ve been trying to do that’s possible with my wakeboard setup. After that my main goal is to wakeboard in some locations across the U.S. and international that I have never been.

TB: Did you ever imagine that you would be called a hero and inspiration for others because of your story?
JC: I never really thought I would be called an inspiration because of my story. I still find it incredible that people are inspired by it. I always knew wakeboarding was cool but really I’m just doing what I like to do. If other people find that inspiring then I guess I’m doing something right haha.

TB: Is there any rider that you've never gotten a chance to ride with or meet that you would really like to?
JC: One rider that I would like to meet is Parks Bonifay. He was always one of my favorite riders and I really like his story.

TB: Are you working on any new video documentaries?
JC: Chris Harris and I are always working on new videos.

TB: What would be a "perfect day" to you?
JC: The perfect day for me would probably be the same answer as my dream riding destination. Plus Adriana Lima along for the ride.

TB: What's your favorite movie?
JC: My favorite movie is probably one of the harder things to pinpoint. I have seen so many movies and I really love film, but if I had to narrow it down I would probably say either Pirates of the Carribbean, the Sean Connery Bond films (yes I’m grouping them all as one), or Forgetting Sarah Marshall.

TB: Who inspires you?
JC: People who inspire me are my family, and my best friend James Craig because he does anything he sets out to do.

TB: Who are your other sponsors?
JC: My sponsors are Nectar Sunglasses who make some of the most fun shades on the market, and Powell Prosthetics because they have helped me create the prosthetic.

TB: Any thanks you'd like to send out?
JC: I’d like to say thanks to my family obviously, Chris Harris for taking this story as far as he has, the Lavin Family, the Baker family, my friends: Dave Knause, Greg Koebel, Reggie Occident, James Craig, Mason Simpson, and Grant Douglas 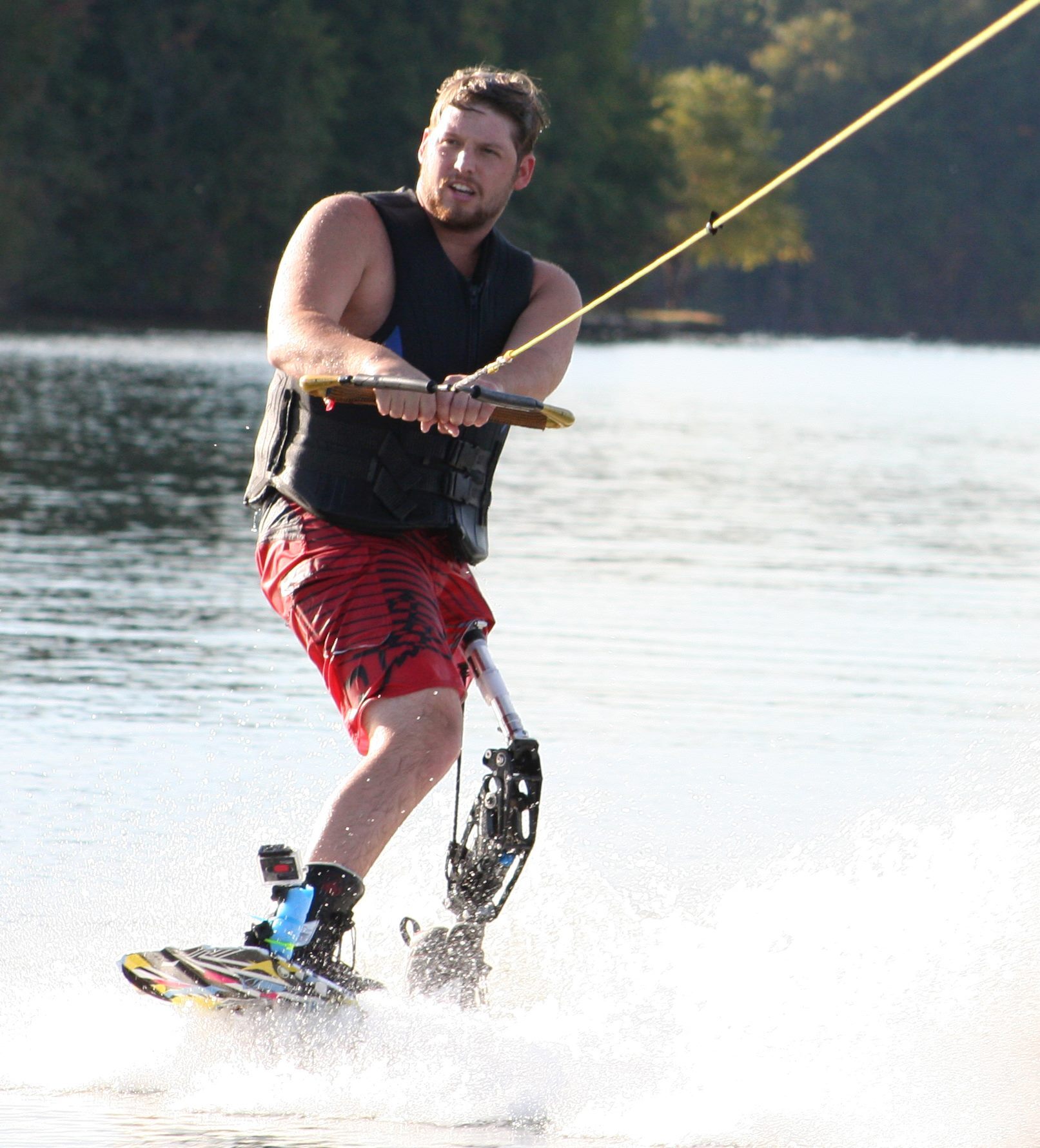