Charlie Pigeon has dedicated his life to family, community, and his vision for Tige Boats.

Charlie is a rare entrepreneur who believes in family and community so strongly that he built a business that supports over 2,000 families globally.

While raising his two sons Ben and Blake, Charlie developed one of the largest inboard boat manufacturing companies in the world. His vision was not just to build a company, but also to build a business that puts family and community first. Using this vision, he has taught his sons’ life values, complexities, and responsibilities.

Charlie spent many years working for ski boat manufacturers until he saw there was room for one more. In 1991, Charlie decided that he was going to create his own watersport towboat company, that above all else, would put the customers first. With little money and a big dream, Tige Boats was founded. Charlie’s skill and craftsmanship was rewarded in 1992 when Waterski Magazine named his very first boat Rookie of the Year. 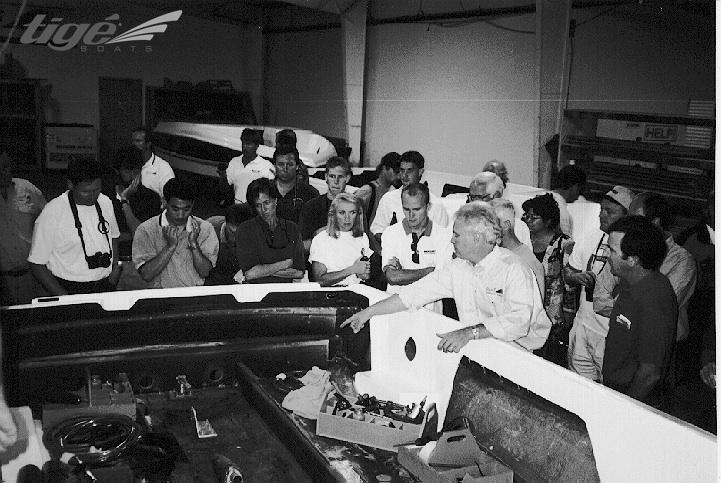 Since 1991, Charlie has continued to grow his company to unimaginable heights and has shattered the expectations of the industry. Charlie has led watersports with revolutionizing innovations and is now the holder of three patents: TAPS2 (Patent #6874441), Convex V Hull (Patent #D488424), and the Convex VX (Patent Pending). While he is proud of his accomplishments, Charlie is most satisfied by the countless smiles and unforgettable memories that his boats bring to Tige owners around the world.

Providing support and exposure for watersports has always been a top priority for Charlie. Tige has been known to hold and sponsor some of the most popular and well-attended grass roots and professional events globally. Charlie also sponsors professional riders from around the world to help spread the passion and lifestyle.

Charlie not only builds and sells people’s dreams, but also encourages dreams of the underprivileged. His passion for others is seen by how he interacts and cares to lend a helping hand to those in need. Charlie has donated time and money and has organized fundraisers to support organizations that promote the betterment of others lives.

With the heart of a philanthropist and the intellect of a business man, Charlie Pigeon has won the well-deserved respect and admiration from his family, friends, peers, and colleagues.