The Reno Mywake Global Finals started with Trevor Miller setting the first wake surf endurance record @ 24 hours and 5 minutes of riding time. The Z3 wave gave him the best chance to stay on the wave With only 4 falls during the ride trevor was allowed to “bank” 5 minutes of rest time every hour for fuel and food stops. His biggest challenge was the temperature with the water at about 15 deg but the air temp overnight getting down to 3-4 deg.

Even with the Mywake final on the weekend the main event was definitely the release of the Tige Apex ASR on Wednesday night. Team riders, dealers, vendors and media from around the world turned up for the biggest event in this privately owned companys history. Those who made the trip were also joined by a massive online audience with live streaming a big part of any Tige event. The anticipation these Texans have stirred up about the new boat has been serious. It started with adding 4 new team members set to give Tige a new profile. 1st up was 2009 WWA world champ and 2013 Transworld rider of the year Aaron Rathy followed by no. 5 on the Prosurf Tour Josh Kerr. Josh is know in the surf world as the rider ripping up the rule book and throwing serious air tricks into the carvers domain. The signing of this Gold Coaster onto a Wakesurf pro team is already bringing plenty of attention from the ocean to the wake surf world. The week later our own Deano’s signing hit the media. Known for riding huge it was only right he was to be a key part of the new boats release. Finishing up the announcement of these rockstars joining a powerful team of truely international wake skaters, surfers and boarders Gold Coaster Cobe France was announced as Tige’s junior member. It is pretty cool for a 14 year old to be recognised and associated with the talent that these riders bring to the new Tige team. With Dean, Josh and Cobe joining Scotty Broome and Daniel Watkins on this very international team it is clear to see that Tiges international Dealer or the year, Mick and Daniel at Prowake are creating plenty of positive influence at Tige. 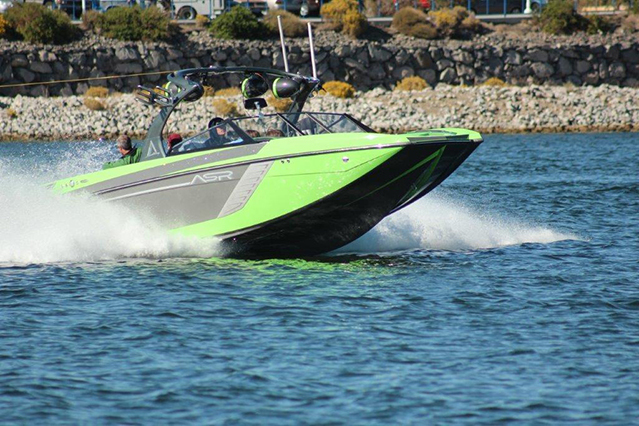 The Apex ASR release started with the introduction of the new team. While there was plenty of support for this crew most were keen to get the curtain on the stage dropped. Lazer lighting, and more teaser videos kept the hundreds in the audience waiting but finally the crowd was unleashed on the new APEX ASR. At 23 foot long the goal for everything on this boat was “BIG”. Designed from the ground up the ASR lines are clean and new but still carrying the distinct Tige flavour while following the brief to bring the biggest cleanest wake yet to the industry. The super charged 550HP Indmar actually looked pretty small under the engine hatch. “Big” did not stop at the interior as it is the best word to describe boats styling, the industry first 3 board wakesurf hatch at the rear of the boat, and best to describe the Bling this boat brings to the water with features like the highlight LEDs hidden behind the Aluminium side panel trim and surrounding the new 10″ wet sounds tower speakers. Deep in discussion with the Wet Sound rep, Kent went into great detail talking up why the ASR sound system was so uniquely awesome- from the angled speaker placement to the use of the new Revolution 10″ tower speakers with colour coded LED light rings. The combination of Tiges enthusiasm to let Wetsounds design a unique system from the ground up made me think “if all the suppliers had this much input into how to integrate their product to the best effect no wonder the boat looks and performs as good as it does.” It was only when the ASR hit the water did Kent want the wet sounds system stay off so he could listen to the throb of the 550HP Indmar in action. 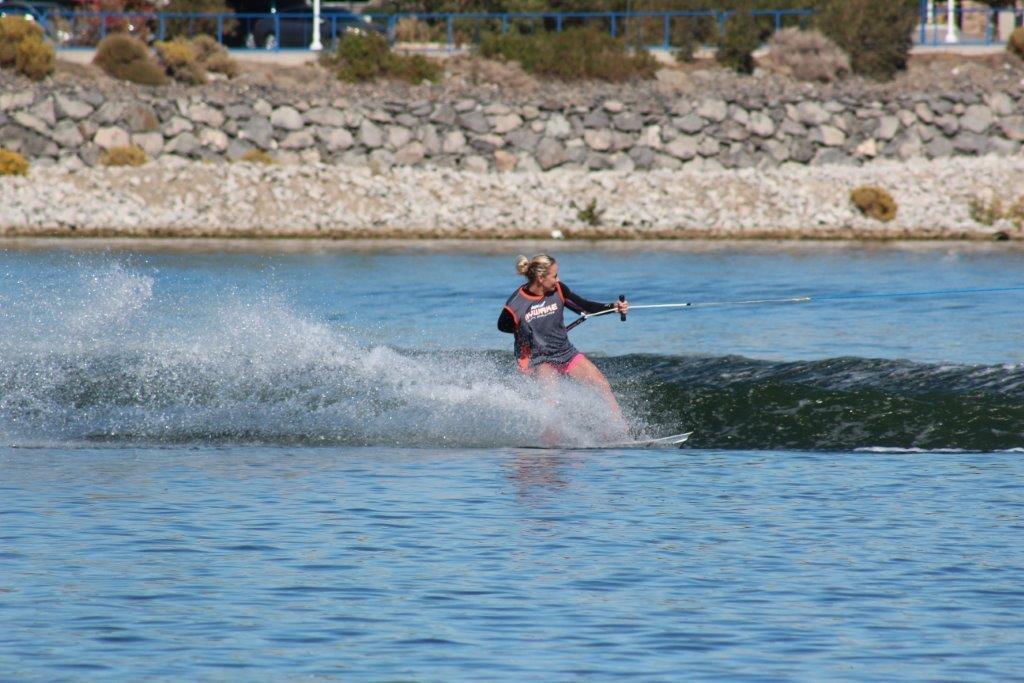 After 3 months of global online competition the next day brought the final of the Mywake Global Challenge starting with amateur divisions hitting the water at Sparks Marina, Nevada. New team member and Aussie Cobe brought home a 2nd in the boys wake surf division. Cobe was loosely following his surgeons instructions of not wakeboarding over winter while recovering from a knee injury that kept him out of this winters worlds.

With everyone waiting for the first pro’s to hit the ASRs wake we were not disappointed. With all the pros running a 2 day combined score based on their “best of 5″ we saw a focus on their big tricks. There was no doubt the Pros loved this wake. With Deano taking the win off Adam Errington and Aaron Rathy. While our Amber Wing busted out the biggest Moby Dick of the day as her first trick Dallas Friday took home first place. What was clear watching the pros hit the ASR wake was not only was this wake simply massive it was super clean.